Warning: "continue" targeting switch is equivalent to "break". Did you mean to use "continue 2"? in /home/mack-inomata/www/japanesestyle/wp/wp-content/plugins/woocommerce/includes/admin/reports/class-wc-admin-report.php on line 132
 Himeji-jo Castle – JapaneseStyle
JapaneseStyle
Home » ショップ » Himeji-jo Castle 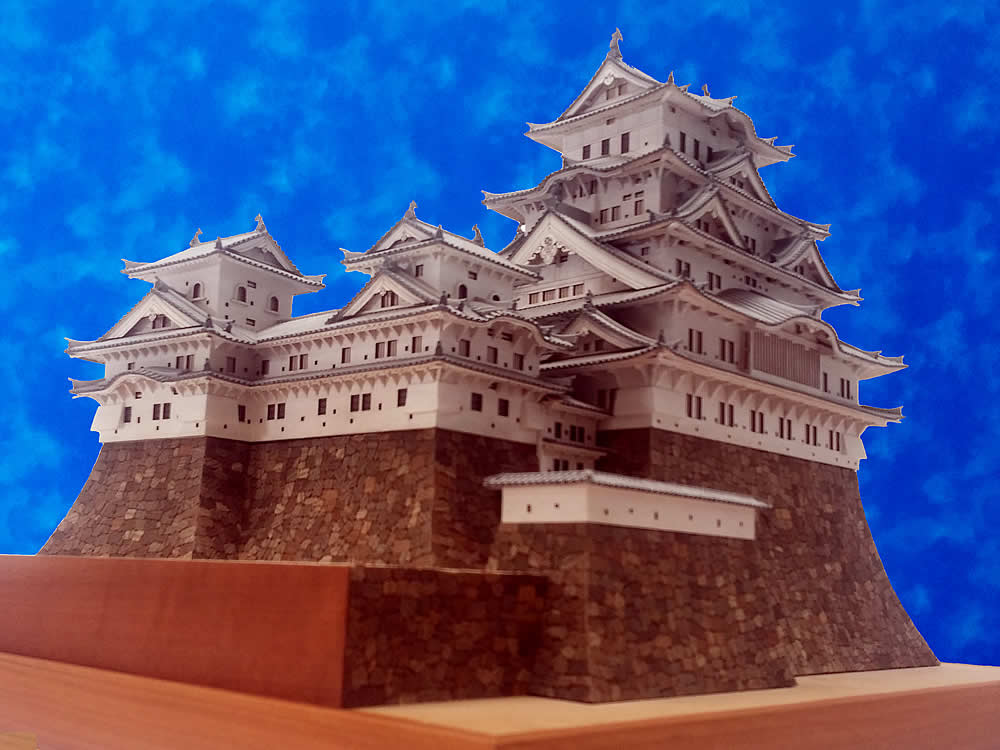 The largest existing castle of Japan

Himeji-jo Castle is Hirayama castle built around Himeyama and Sagiyama on the northern side of Himeji City in Himeji Shikito-gun of old Harima County. It is representative of modern castles in Japan. The castle tower built, before the Edo period, holds one of the existing 12 tenshus. Most of the castle area within nakabori is a special historical site, eight of the existing buildings, such as the Great tenshu, the small tenshu, the bridge towers are national treasures. Of the 74 buildings remaining, 27 towers, 15 for gates and 32 for walls, are designated as important cultural assets.

It is the largest existing castle of Japan, with a Tenshus of the coalition formula in which Great Tenshu of 5 storied, 6 floors and 1 underground floor, 3 small towers of 3 storied floors are connected by a double tower. It was a simultaneous formula, which was different depending on the viewing direction of the outer wall of chalk and the construction aesthetics of the roof and gable which was painted with white plaster from the late Momoyama to the early Edo period (Architecture). It is said to be a representative of a present age castle. Moreover, the only castle in the “existing 12 Tenshu” has a shrine and a toilet in the castle. The alias is called Shirasagi castle (shrine castle). 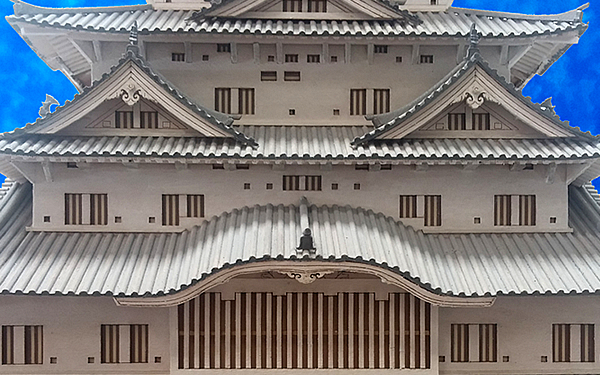 Great Tenshu is located in the southeastern corner of the castle tower, it has a 5-storied exterior with the interior being a underground floor and a sixth floor. At both ends of the big building, on the top floor there is a pair of large roof tiles (Shachigawara) for decoration. The appearance is harmonious and very beautiful due to the combination of staircases, (Chidori-Hafu), large chidori hafu, and tangle breeze (Kara-Hafu). It is one of the three minsters and is located in the northwest corner of the castle table (in the direction of dryness). In addition there are, “east” and “west” small towers, the largest of the three small tombs, three layers of exterior, the interior is the first floor of the basement and the fourth floor above. The place where the castle owner Terumasa Ikeda lived was the main building of Honmaru. There was a meeting place to meet with customers, but it was destroyed by a fire in 1882(15th year of Meiji). National Treasure Himeji-jo Castle was first registered in Japan as a UNESCO World Cultural Heritage in December 1993 (3 rd year of Heisei). In addition to this, it is also counted as one of “National Treasures 5 castles”, “Great 3 castles”, “Three major oval castle and three major coalition Hirayama castle”. Himeji-jo Castle was evaluated as a historical site, representative of Japanese castle building in the early 17th century.

Reason for evaluation for the World Heritage

Himeji-jo Castle was registered as a World Heritage Site,
・ The aesthetic perfection degree is in the highest position of wooden buildings in our country and it is excellent unlike any other worldwide.
・ During the heyday of castle building in the early 17th century, buildings such as towers, gates, walls, civil engineering buildings such as stone walls and moats were well preserved, and Japan’s unique castles were devised for defense .

Himeji-jo Castle was evaluated because it is a castle the best describes this sort of structure.
Detailed information is explained in the guidebook attached to the product.

An introduction to the History of Himeji-jo Castle

It was said in 1333 that Mr. Akamatsu was the first to build a fort in the land of Himeyama. Since then, thirteen families and forty-eight generations have served as castle owners. The castle is here today without being covered by battle dust.

After Mr. Akamatsu, Hideyoshi Hashiba, Terumasa Ikeda, Tadamasa Honda entrusted the dream to make the castle an the important base during the reign of the Akamatsu. It was the last time the whole thing could be seen as it was in 1617 until Sengoku era was over. 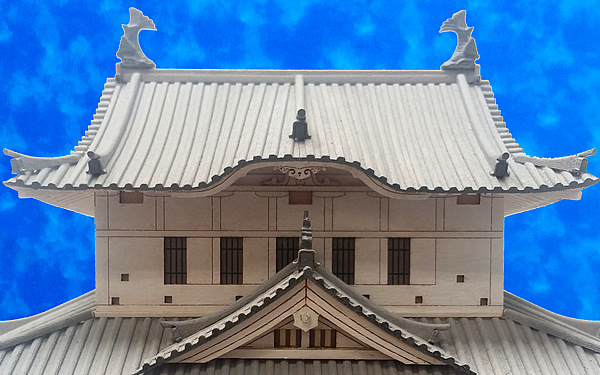 We will introduce the features that show the scale of Himeji-jo Castle.

The 5 storied, 6 floors and 1 underground floor Tenshu and 3 small Tenshus are connected by a wandering tower, and the roofs overlap many times. Chidori-hafu and Kara-hafu gable blow, white stucco total painting basket ( Combined with the exterior decoration of plaster stuffing, it creates a gorgeous composition.

The functionality as a castle fortress is determined by the strength of the terrain (design, composition, structure). The structure of Himeji-jo Castle has a resistive (defensive) line with a triple helix. This is only a form analogous to Edo castle and Himeji-jo Castle.

In the 400 year history, Himeji-jo Castle is a rare castle that never encountered warfare and never encountered modern war damage. As a result, the preservation state of the castle Tenshus, towers, gates etc. is very good, and there are many other unusual remains, which is extremely precious to its cultural heritage.

In 1600 (5th year of Keicho), Terumasa Ikeda entered with 150,000 Koku(1 Koku corresponds to 180.4 litres) from Mikawa Yoshida. Harima had 520,000 Koku (Harima dominated the area) due to Sekigahara’s battle. Terumasa received Order from Ieyasu to check the West Countries with the Toyotomi Patriotic Daimyo. After a period of 8 years, from 1601(6th years of Keicho) a Yado-mura, Naka-mura, Kokufuji-mura, was built around Himeyama castle. Nakabori placed a gate in every 8 cho(79340 m2) and planned to connect the castle to the decorated Harima-port to the outer moat with a canal, but due to Terumasa’s death and the height difference of the terrain it could not be completed. The canal plan was realized by repairing the Senba River in the later Tadamasa Honda era. The Ikeda family leader, Tadashige Iki and the carpenter building manager, Gembei Sakurai. It is estimated that the people of the area were invited to work and that the total number of people involved in the castle was around 40 to 50 million people. In addition, Akashi-jo Castle, Akoh-jo Castle, Miki-jo Castle, Rikan-jo castle, Tatsuno-jo castle, Takasago Castle were also improved as a foundation for Himeji-jo Castle.
For more stories, please refer to the guidebook attached to the product. If you read it you can become a master that is more familiar to this than the Japanese. 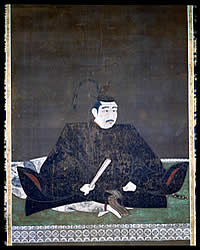 Born in 1564 (7th year of Eiroku), Nobunaga Oda’s Deputy Minister ・Tsuneoki Ikeda as the second son, he called his childhood Furushin. After he became adult he was called the real name “Terumasa.” The real name “照政(Terumasa)” was confirmed in Keicho 12 years leap April 9th, and from July 3 it was confirmed that he was renamed to “輝政(Terumasa)”. Serving Nobunaga with his father and older brother ・ Gansuke, Terumasa became Nobunaga’s general practice. In 1573 (The first year of Tensho), Terumasa was adopted by his paternal uncle Yoshihisa Arao in the Ikeda Family, and became owner of Kida-jo Castle. When Battle at Hanakuma Castle was captured in 1580 (8th year of Tensho), he was set to take away 5 or 6 samurai of the Araki army by himself on March 2, Nobunaga imparted a feeling with his military skill.

In August 1598 (3rd year of Keicho) when Hideyoshi died as he approached Ieyasu. Mr. Masanori Fukushima, Kiyomasa Kato and other samurais of militant faction, fighting with Mitsunari Ishida of humanities, and engaging in arbitration between the militant faction and the humanities in 1599 (4th year of Keicho) March. When Toshiie Maeda died, as one of the seven masters, Mr. Masanori Fukushima, Kiyomasa Kato, Yoshiakira Kato, Yoshinaga Asano, Nagamasa Kuroda and others raided Mitsunari Ishida. In the battle of Sekigahara in 1600 (5th year of Keicho), he participated in the capture of Gifu-jo Castle that would become a prelude to the main battle.

After the war, due to the capture of Gifu-jo Castle, 520,000 Koku were transferred to Harima Himeji and he became the first lord of Himeji. Terumasa got a political position as a national daimyo here. In December, he was appointed to fourth generations lower and right general. More generals other than the Major General in the Daimyo and other than Mr. Tokugawa family were next to Masanori Fukushima in March of the previous year and it can be said that this indicates the height of the political roles of both in the early Tokugawa Shogunate administration.
If you want to know more details, please purchase the product and read the attached guidebook. If you read the book you can become a master that is more familiar to this than the Japanese. Surely you will be satisfied.

A perfect guidebook is appended

For this product, a guidebook that covers stories and detailed informations are appended. Please take a look at the product first and then watch it carefully. Next, We recommend you to peruse the guidebook deeply. In addition, please refer to the explanation of the guidebook and try and taste the product again.
You can gain a deeper understanding than when you first picked it up and you can make this product your own.

Because this product is handmade by a complete craftsman, we accept orders for only 2 pieces per month from all over the world. We will deliver it to you in about 4 months. Please wait for your product to be completed from ordering to delivery.